That’s how we decided to go to Langkawi. Pulau Langkawi is the main island of a string of 99 tropical dots in the blue Andaman Sea. It is without a doubt a tropical paradise, the kind we only see on postal cards. 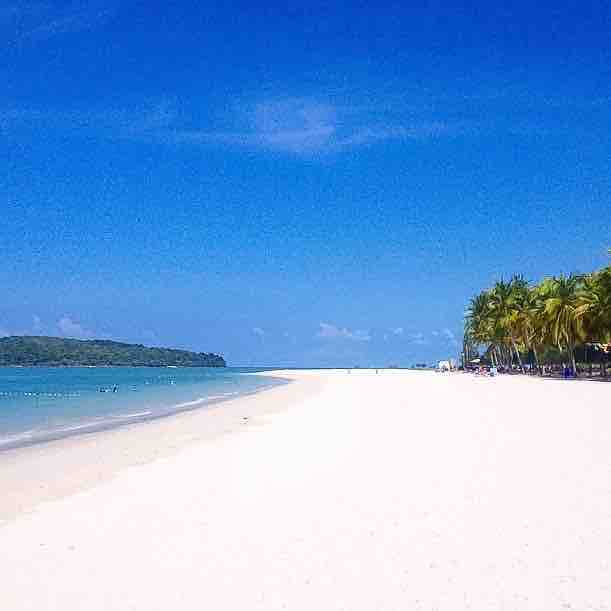 First, we arrived at our hotel, the Season Inn, located in Kuah, Langkawi’s major town: a Muslim industrial and commercial town. What’s there to see? There’s the night market… We can see there Muslim women trying to sell Western sexy clothing… it’s weird! Besides the market, there’s not much to see, in my opinion. Kuah is boring, if you want the naked truth!

Staying in Langkawi during the Chinese New Year, there wasn’t any motorbike available to rent at Kuah, to our great desperation. Since there’s not much to do in Kuah, we really wanted to get out of there and visit the rest of the island! We could always travel around by taxi, but the cost over the course of a whole week would be too expensive.

The first day, we ventured to Tanjung Rhu, ‘the most beautiful beach’ on Langkawi, according to locals and reviews on Trip Advisor. Oh my goodness! Having been on Koh Rong Island, in Cambodia, the week before, where the beach is a large stretch of white soft sand, and with crystal clear water, Tanjun Rhug wasn’t that impressive with its troubled water. We usually try not to compare, but then, we couldn’t help but feel sorry for ourselves. At that moment, we seriously thought it was a mistake to come to Langkawi. In fact, Tanjung Rhu is beautiful, but not as much as Sok San Beach on Koh Rong island, and the prettiest part of the beach is private property of the Four Season Hotel, so we couldn’t enjoy it as much as we would have liked it to.

Then we heard of Cenang Beach, a cool 2km-long beach strip with shops and restaurants. Thank you Cenang! At least at Cenang, there’s some action, the sunset is breathtaking and the food is good! Moreover, the calm water at Cenang Beach is perfect for swimming, unlike Tanjung Rhu, where people have died because of its strong undercurrent. Cenang Beach is also the destination if you want to take a ride on a jet ski, try parasailing, or just ride a banana boat!

What I think is special about Langkawi, besides a couple of beautiful beaches, is its luxurious vegetation, and its rural charms. When we finally rented a motorbike, we drove around the island so many times, enjoying the vistas and feeling the local vibe! The people are extra friendly, and nature is unspoiled.

Langkawi is big for shopping too! It is duty free since 1986, so here we can shop and drink cheaply! Not that we drink much… hard to party all night with a 3-year old sleeping with you 😉

Besides shopping, there’s a lot we did on Langkawi! The mangrove tour is a must! We fed colorful zebra fishes, gave water to monkeys, spotted hunting eagles and visited dark caves full of sleeping bats. The vistas are particularly gorgeous here since we can admire the mangrove with a mountainous background. We really had a blast! 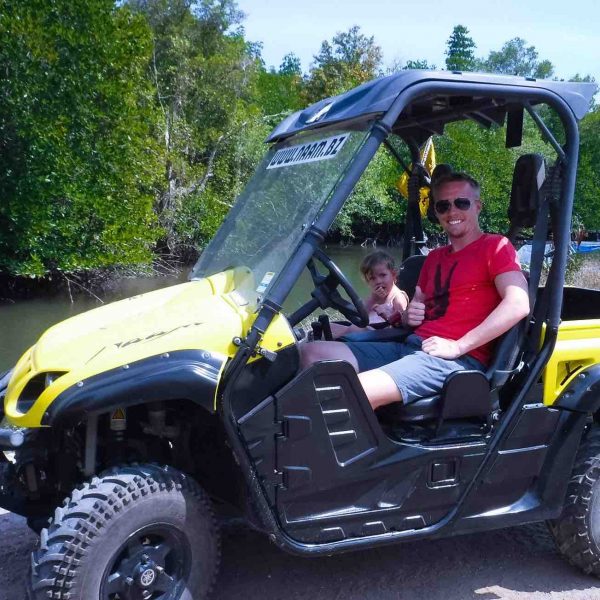 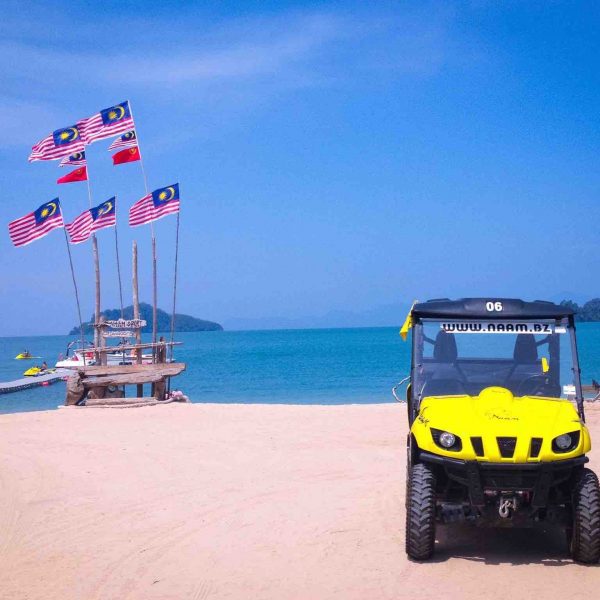 We also did an ATV ride in the jungle! Time to go fast and wild!! Clinton would have been gone forever, driving in the tropical forest… the 45 minute ride was barely enough! He comforted himself with a stunning 18-hole golf game at the Els Golf Club Datai! One of the 3 best golf courses he ever played… and he played a lot, all around the world, believe me! (I am usually known as the golf-widow among my friends!) 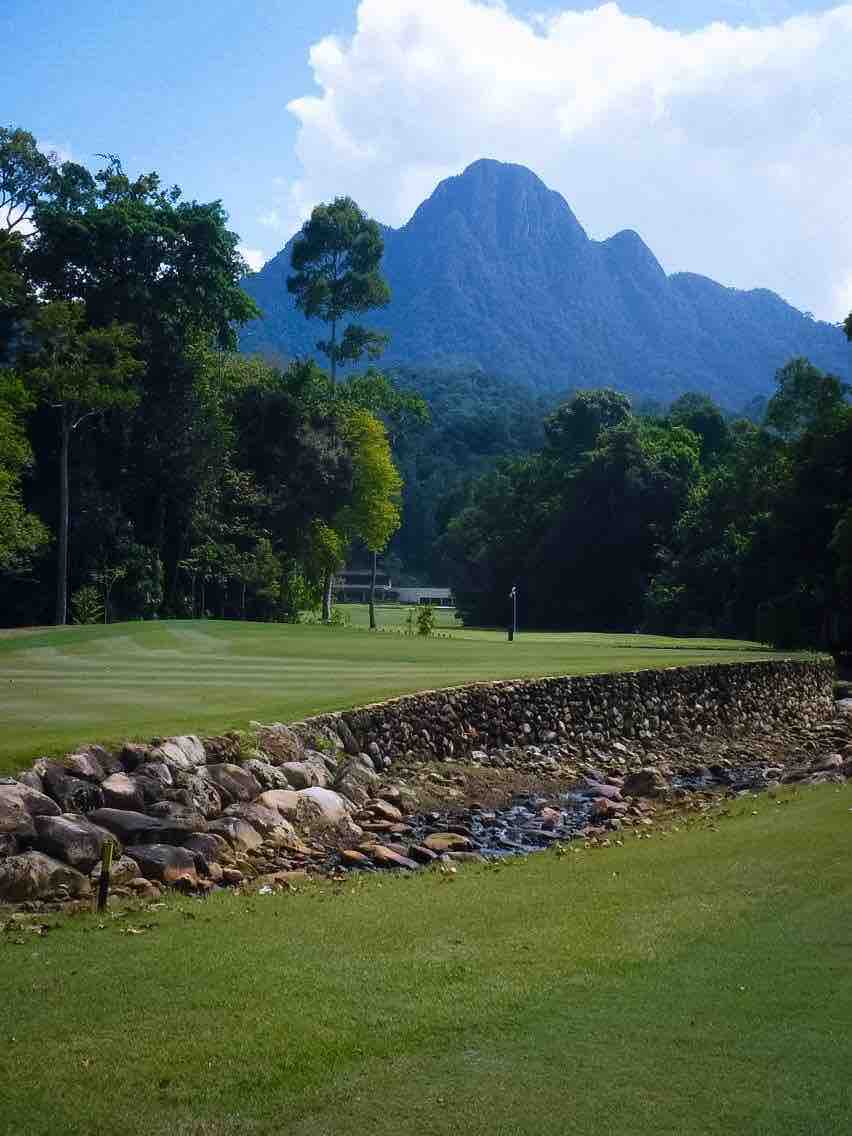 The most famous attraction on Langkawi is without a doubt its cable car ride: it’s the steepest in the world! It is quite an experience to go up 708m above sea level to Langkawi’s second highest peak, the Mt. Machinchang, where the view of the surrounding islands is simply breathtaking! Even if I am not afraid of heights, I have to admit I had the chills going up, and down. The thing is, there’s so many people that wants to ride the cable car, we don’t even line up. We buy a ticket for hours later, and then we spend that time enjoying ourselves at the Oriental Village, that’s located right at the base of the ride. For those who know Mount Tremblant, in Quebec, it is quite the same thing: a lot of shops, cafes and games for kids and adults! Myself and Emma-Kate had to try the Roller Orb. We had so much fun!! It was a little bit too much for Emma-Kate, since I enjoyed rolling her up without rest! The 8-minute ride was too long though, since the temperature got to at least 50°C in there. It was a sauna! 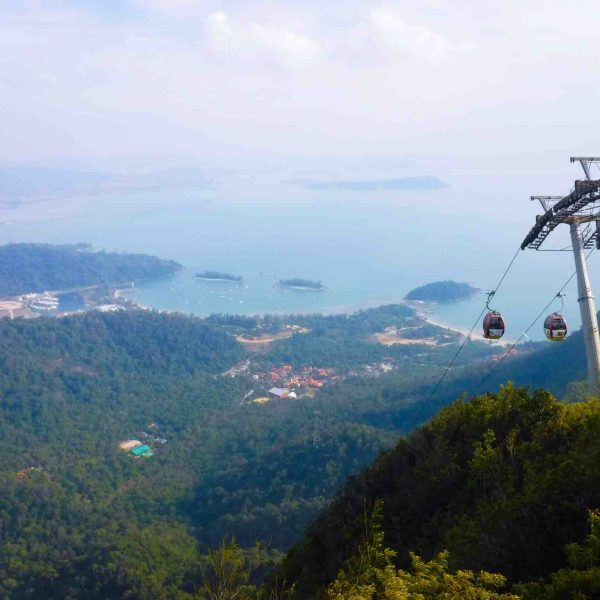 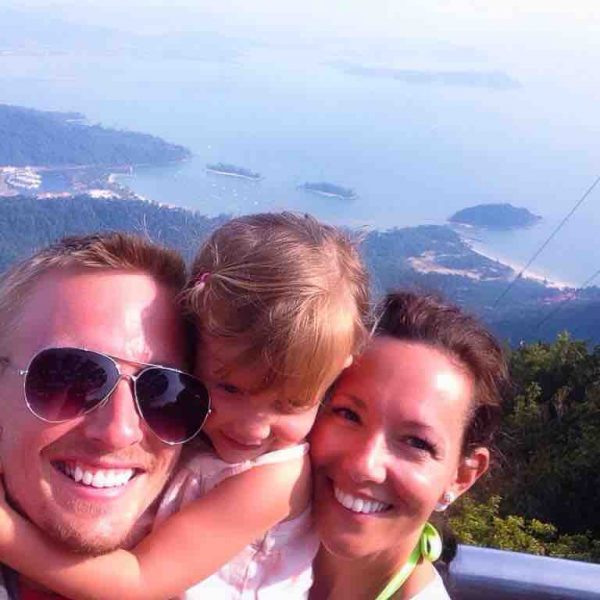 There’s a lot to do on Langkawi island with young kids. We visited the Wildlife Park and Bird Paradise, and then the Underwater World, two attractions where Emma-Kate was excited to see and touch new animals, like a python and pink flamingos! 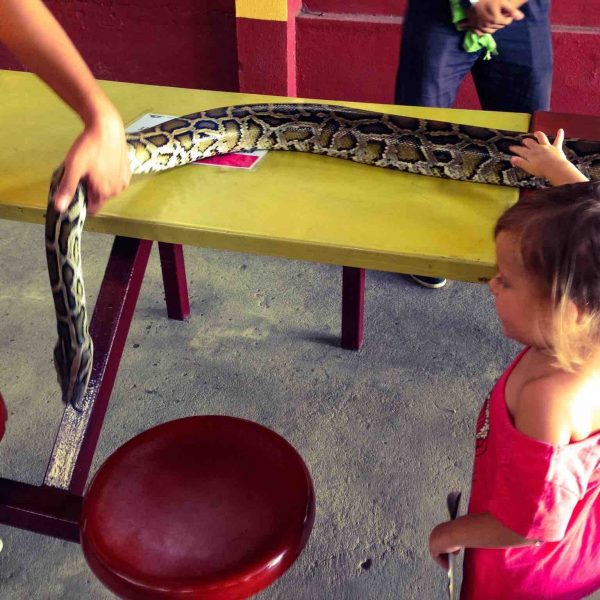 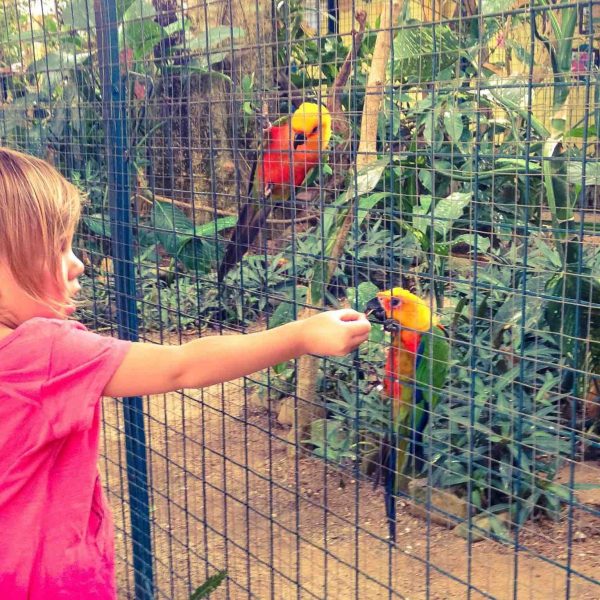 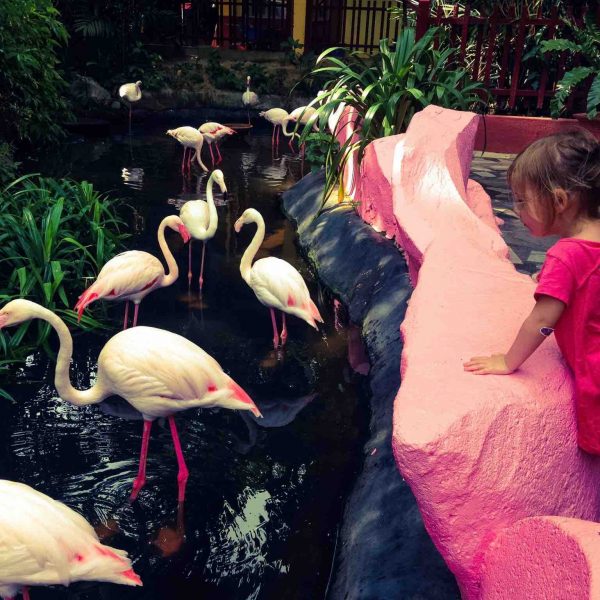 It’s also interesting to know that Langkawi is a very clean island. There’s no garbage by the roads, no dumps, unlike Cambodia.

Yes, Langkawi is great for everyone. It has a lot to offer to kids, animal lovers, adrenaline junkies and avid shoppers. I would recommend that you would stay at Cenang Beach, so you have access to all the restaurants and shops. I would also tell you to rent a motorbike to discover the beauty of Langkawi’s island. We stayed there for a week, and there’s enough to do to be busy for that long! 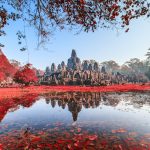 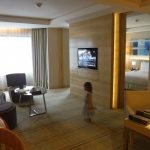