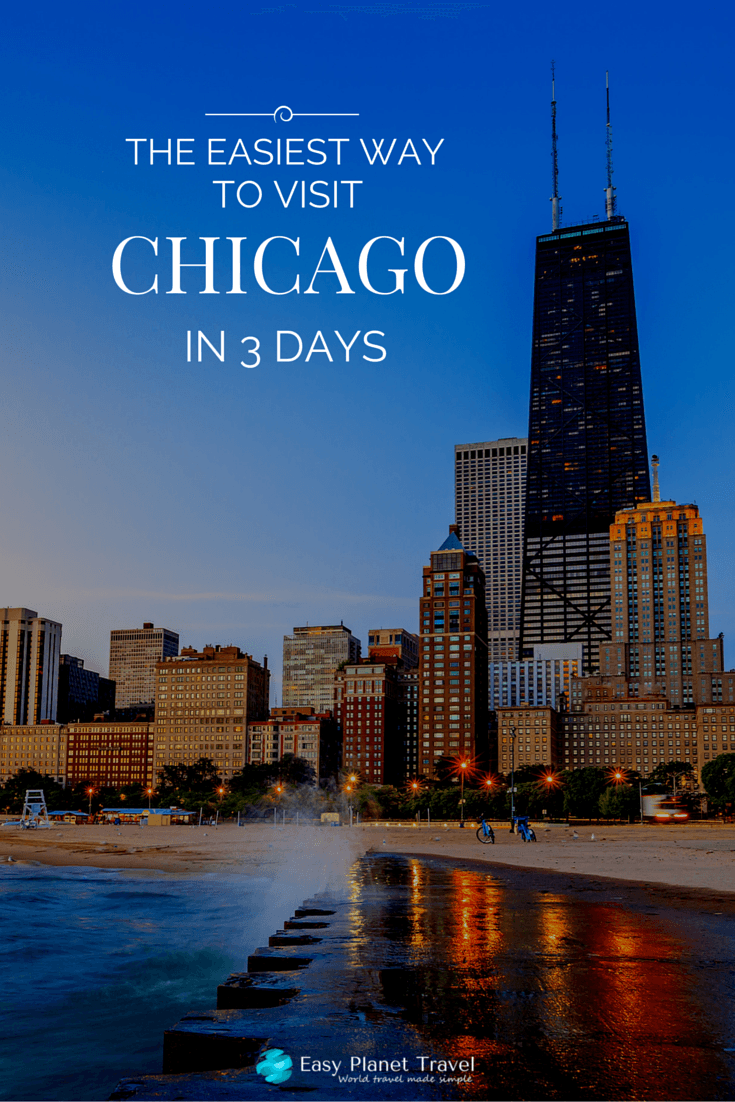 Chicago, the Windy City, has a lot to offer to its visitors. You can easily visit Chicago in 3 days, and I know that because I did it with my 1 year old last year. So it’s easy enough for a tired mom and her baby! 😉

You can get this itinerary to download by clicking here: amazing 3-day itinerary of Chicago! 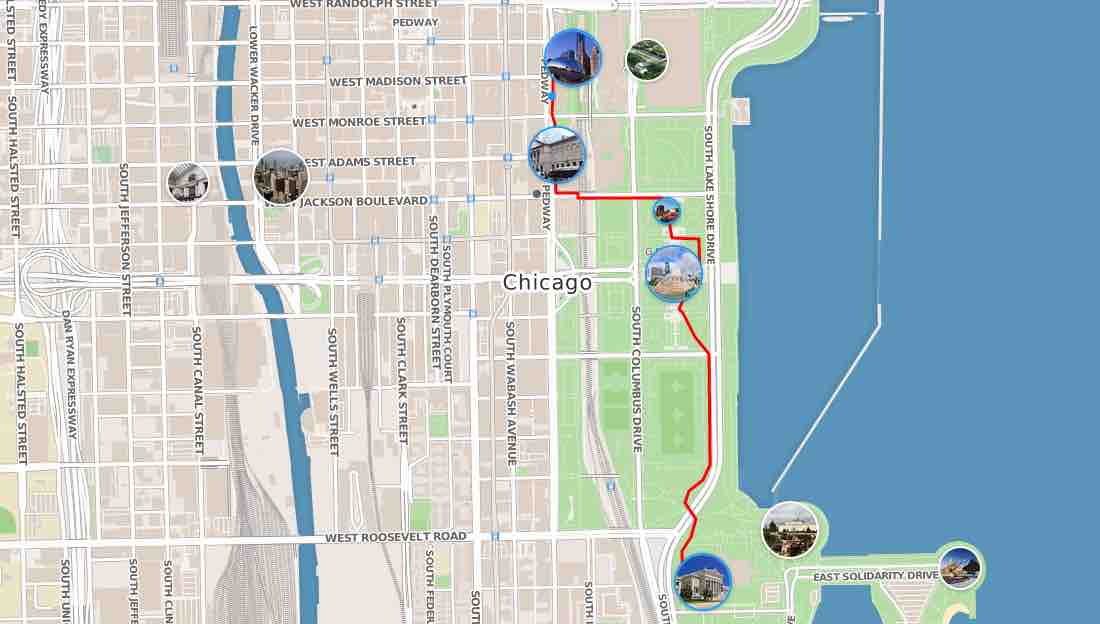 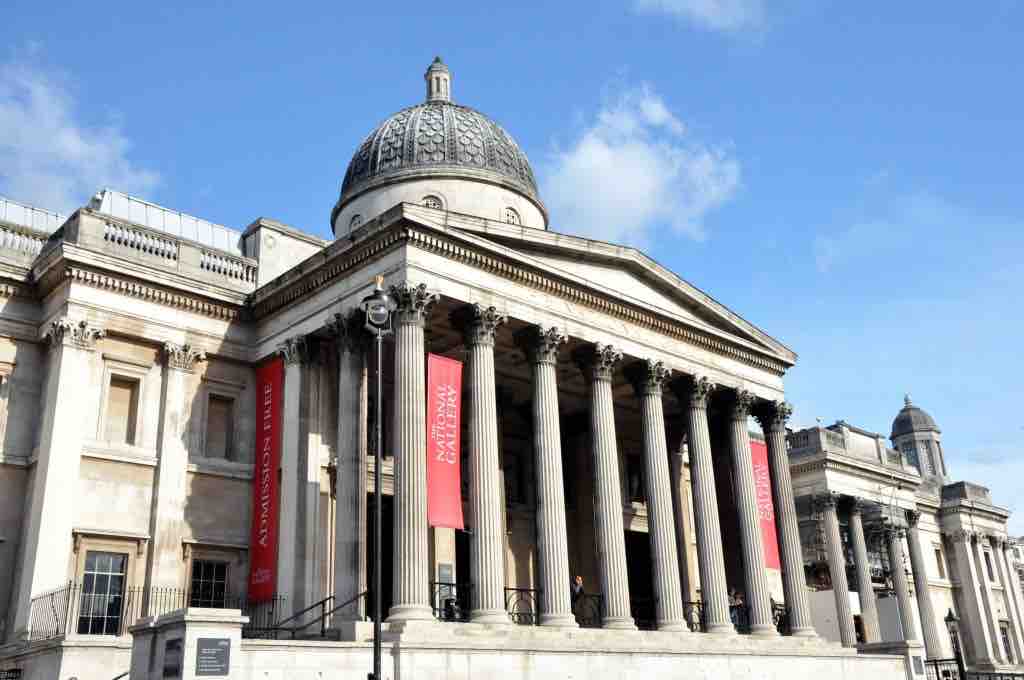 The Field Museum of Natural History is one of the largest natural history museums in the world. The museum maintains its status as a premier natural history museum through the quality and size of its educational and scientific programs, as well as due to its comprehensive scientific specimen and artifact collections. The diverse, high quality permanent exhibitions, which attract up to 2 million visitors per year, range from the earliest fossils to past and current cultures from around the world to interactive programming demonstrating today’s critical conservation need. 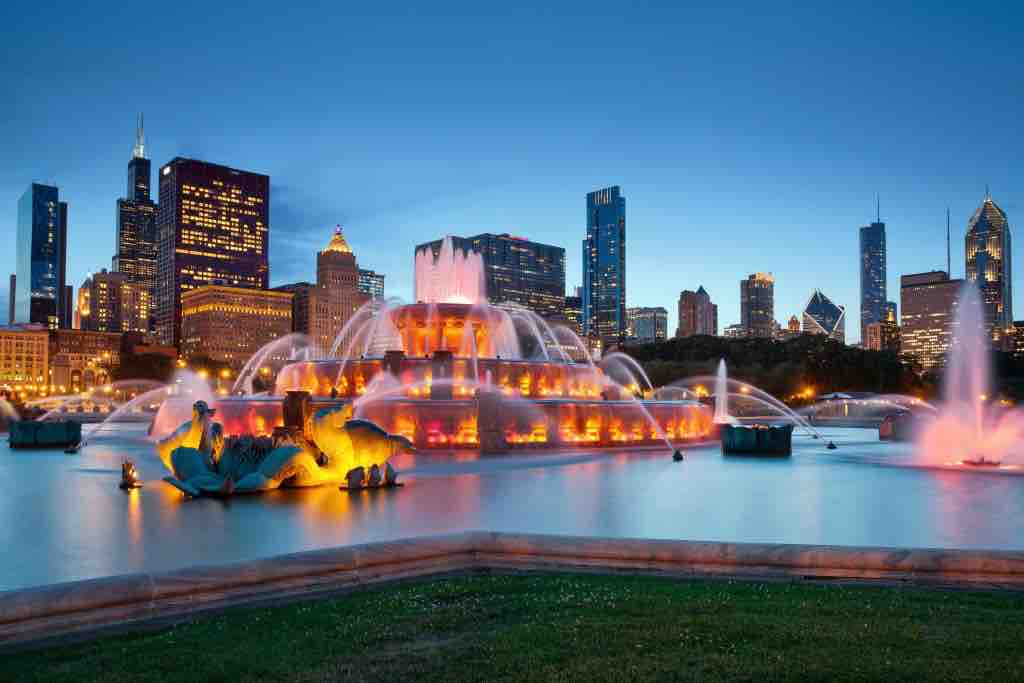 Buckingham Fountain is a Chicago landmark in the center of Grant Park. Dedicated in 1927, it’s one of the world’s biggest fountains. Built in a rococo wedding cake style and inspired by the Latona Fountain at the Palace of Versailles, France, it’s meant to represent Lake Michigan. It operates from April to October, with hourly water shows and evening color-light shows. During the winter, the fountain is decorated with festival lights.
Try to get there on the hour, when jets of water spurt dramatically into the sky.

The Art Institute of Chicago 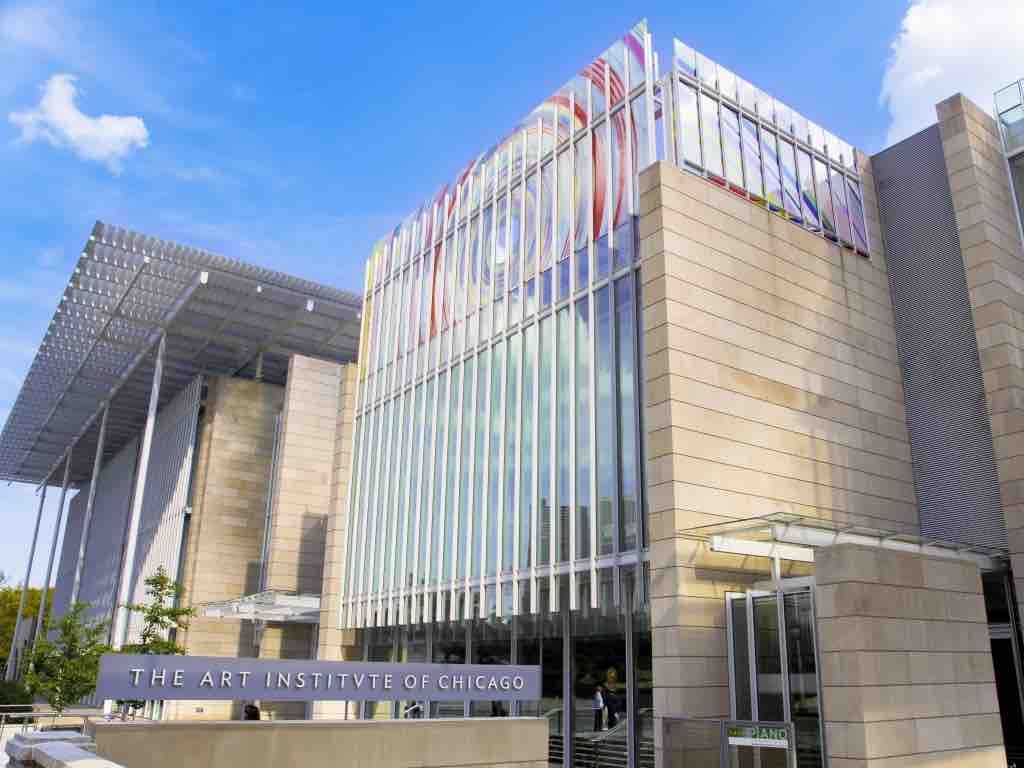 The Art Institute of Chicago is an art museum located in Chicago’s Grant Park. It features a collection of Impressionist and Post-Impressionist art in its permanent collection. Its holdings also include American art, Old Masters, European and American decorative arts, Asian art, modern and contemporary art, and architecture, industrial and graphic design. In addition, it houses the Ryerson & Burnham Libraries. 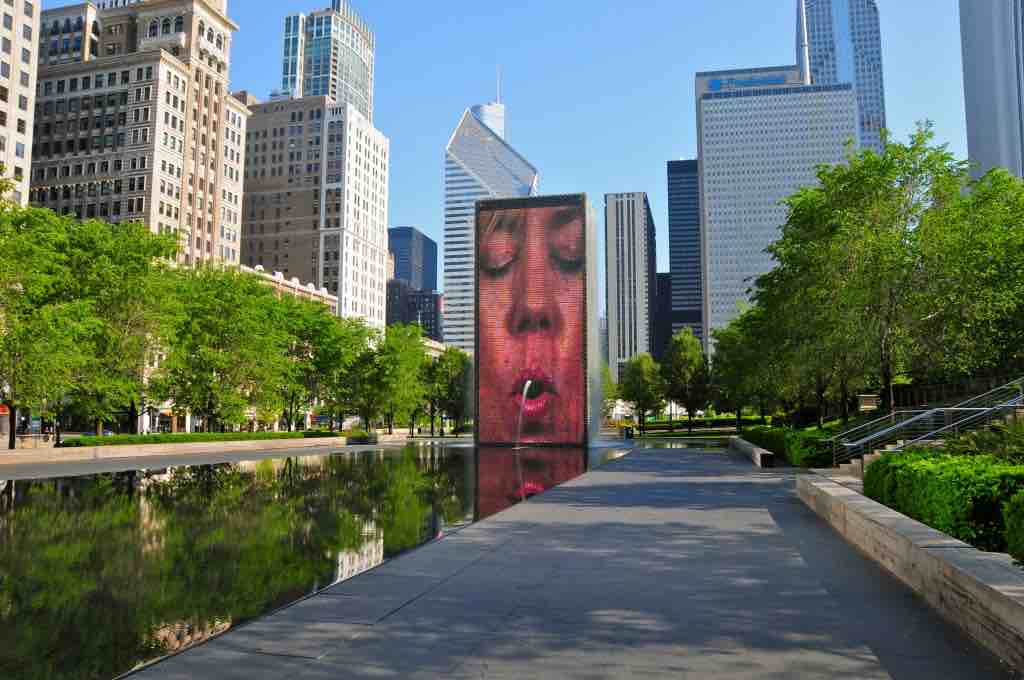 One of the highlights in Chicago’s Millennium Park is the spectacular and modern Crown Fountain. Its two glass towers are illuminated with LED lighting that shows moving images of Chicagoans’ faces.

The fountain, financed with private donations including a 10 million dollar gift of the Crown Family, consists of two 15 meter (50ft) high towers flanking a 71 meter wide (232ft) granite plaza. The fountain was designed by Spanish artist Jaume Plensa and the installation was built by Krueck + Sexton Architects and Crystal Fountains.

The most remarkable aspect about the towers are the LED powered video screens that show close-up faces of about 1000 Chicagoans. Each face is shown for about five minutes, then the subject purses its lips and water spouts from their mouths. After a short period of time a new face is randomly chosen by the fountain’s computer system.

Cloud Gate, aka ‘The Bean’ 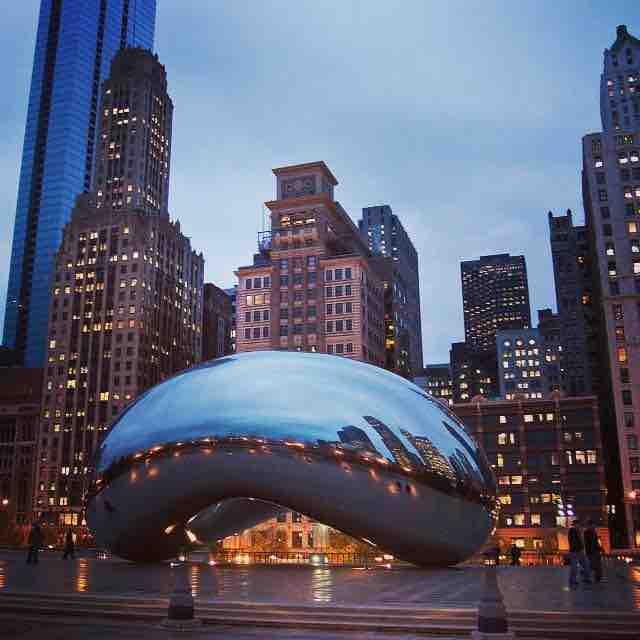 The elliptical sculpture of 110-ton is forged of a seamless series of highly polished stainless steel plates, that reflect Chicago’s famous skyline and the clouds above. A 12-foot-high arch provides a “gate” to the concave chamber beneath the sculpture, inviting visitors to touch its mirror-like surface and see their image reflected back from a variety of perspectives.

Inspired by liquid mercury, the sculpture is among the largest of its kind in the world, measuring 66-feet long by 33-feet high. 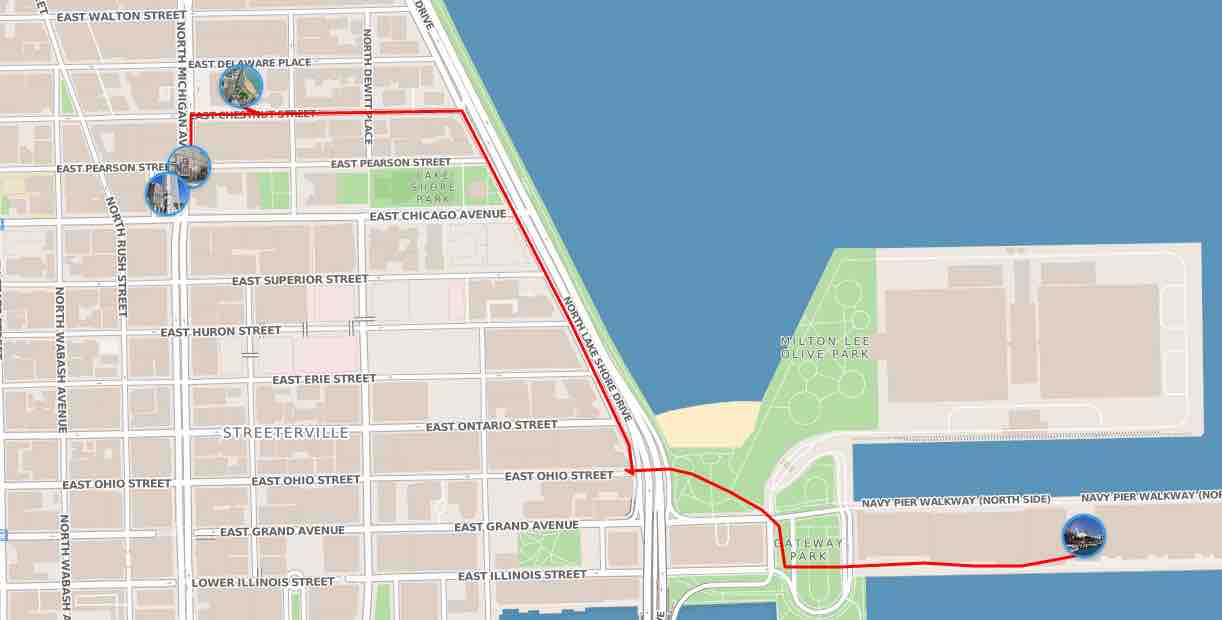 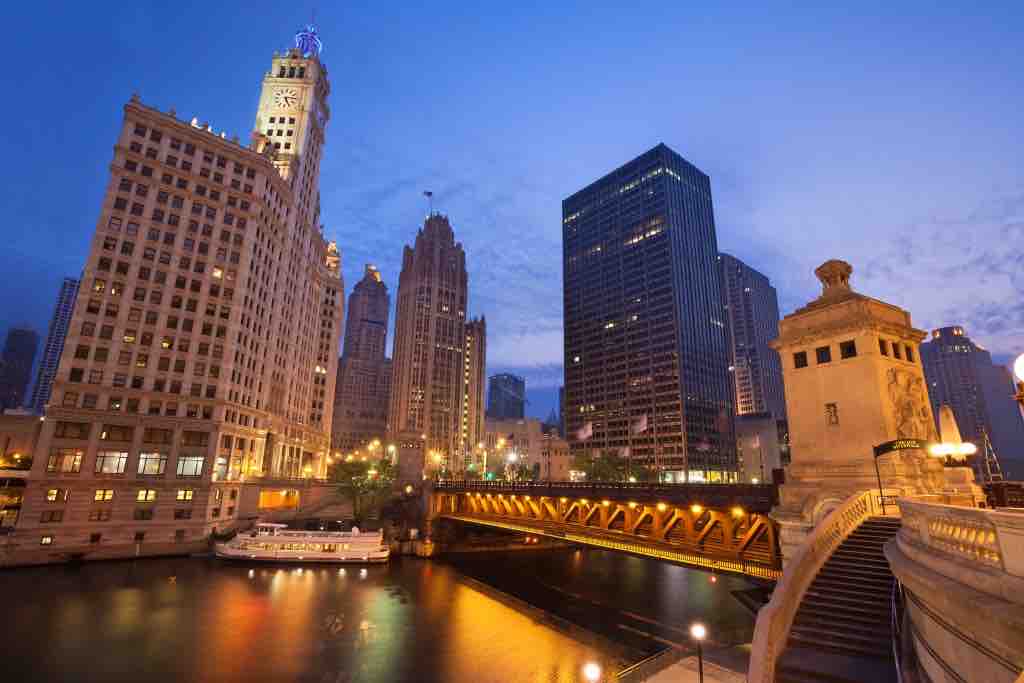 Commonly known as the Michigan Avenue Bridge, the bridge and upper-level Wacker Drive were designed to improve transportation and to enhance Chicago’s riverfront. The completion of the bridge, followed by the Wacker Drive esplanade (1926) and the monumental sculptures (1928), provided an impressive gateway to North Michigan Avenue and led to its development as one of the city’s premier thoroughfares. This bridge was officially renamed the DuSable Bridge in October 2010, to honor Jean Baptiste Pointe DuSable. DuSable was the first non-native settler in Chicago. 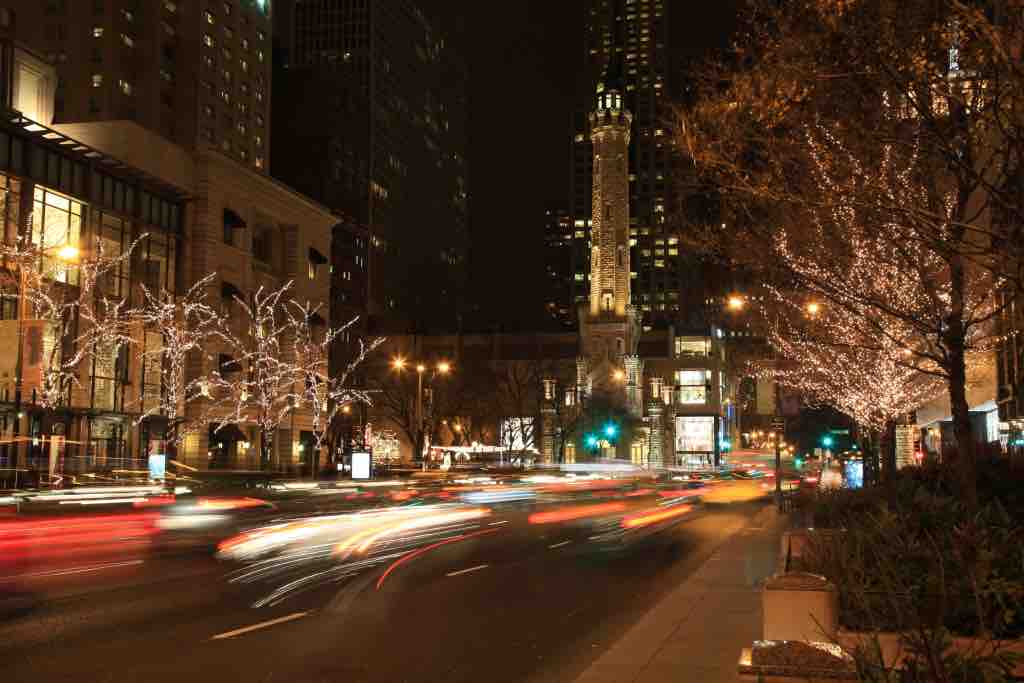 Chicago’s Magnificent Mile is the 13-block stretch of North Michigan Avenue that runs from the banks of the Chicago River to the south, to Oak Street to the north.

Chicago’s Magnificent Mile is the great Chicago shopping experience with wide variety of boutiques and stores to spark every interest, meet every need and charm every visitor.

The shops on The Magnificent Mile are as diverse as the goods they sell, with towering shopping centers, department stores, specialty retail shops, chic designer studios and luxury boutiques all within an easy walk.

At the top of Chicago’s famous Magnificent Mile, Water Tower Place is Chicago’s premier shopping destination. Named for the nearby Historic Water Tower, one of the only structures to survive the Great Chicago Fire of 1871, Water Tower Place features a splendid eight-level atrium and offers American Girl Place, Macy’s and more than 100 stores, restaurants, spas – many of which are exclusive to downtown Chicago. 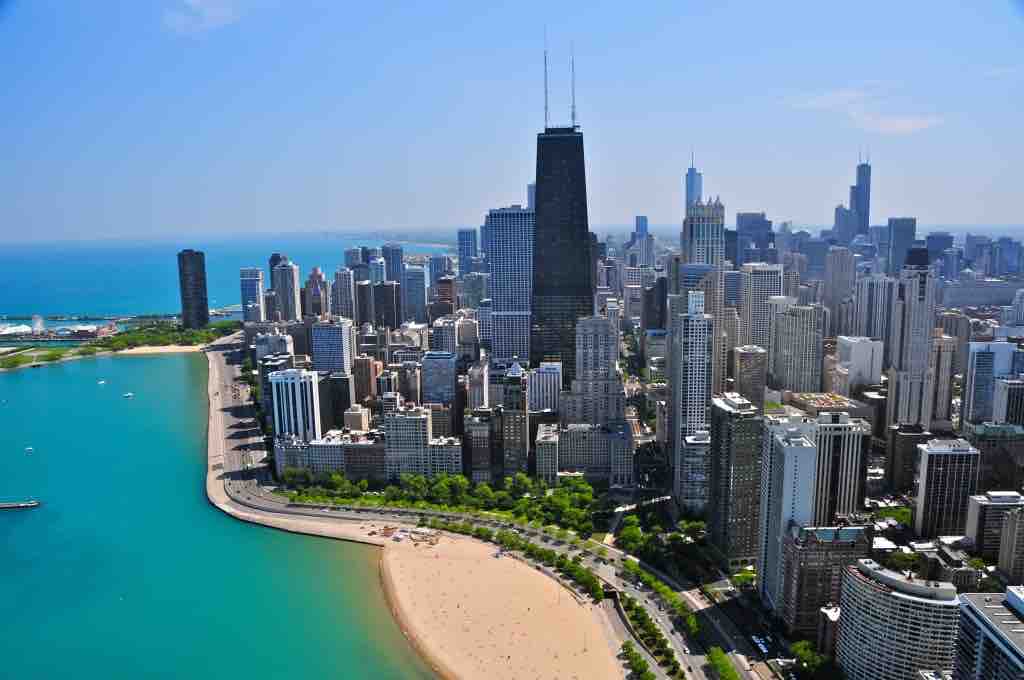 Formerly known as John Hancock Observatory, the 360 Chicago soars 1,000 feet above Lake Michigan and the city’s majestic skyline to offer visitors the most breathtaking views of downtown Chicago, the lakefront and four neighboring states (Illinois, Indiana, Michigan and Wisconsin). Add to that their interactive technologies, TILT the new exhilarating angle on Chicago, the enticing 94th floor café, and you have 360° of all-around entertainment! 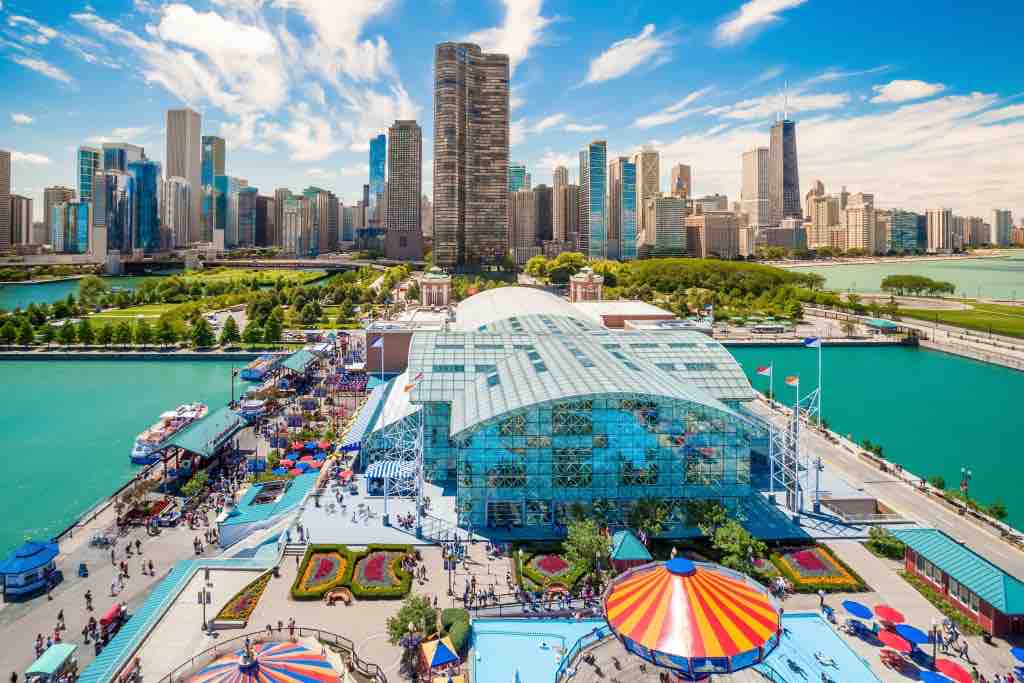 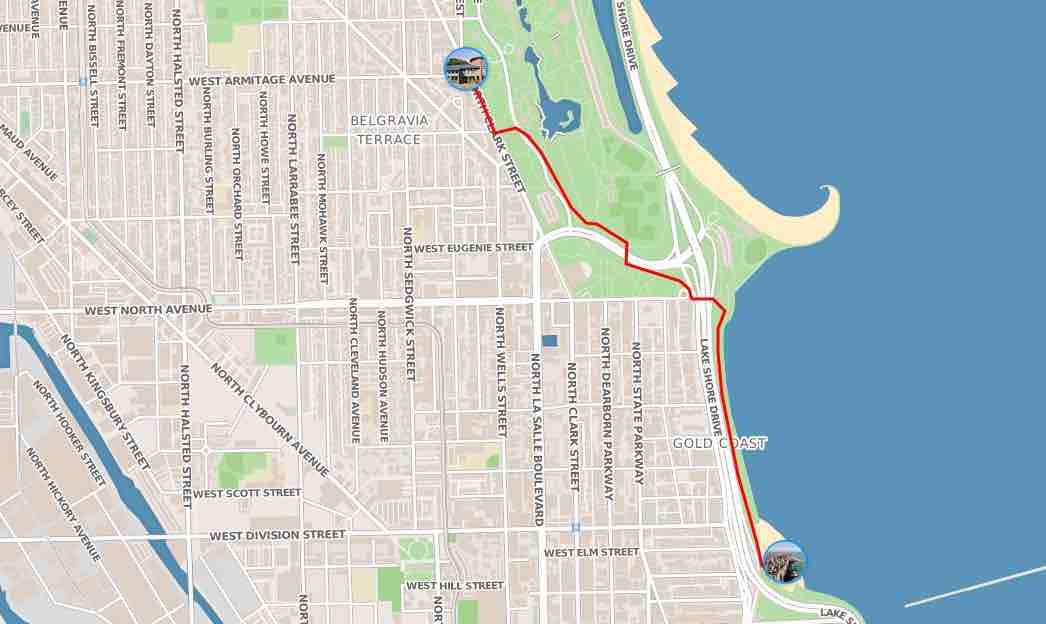 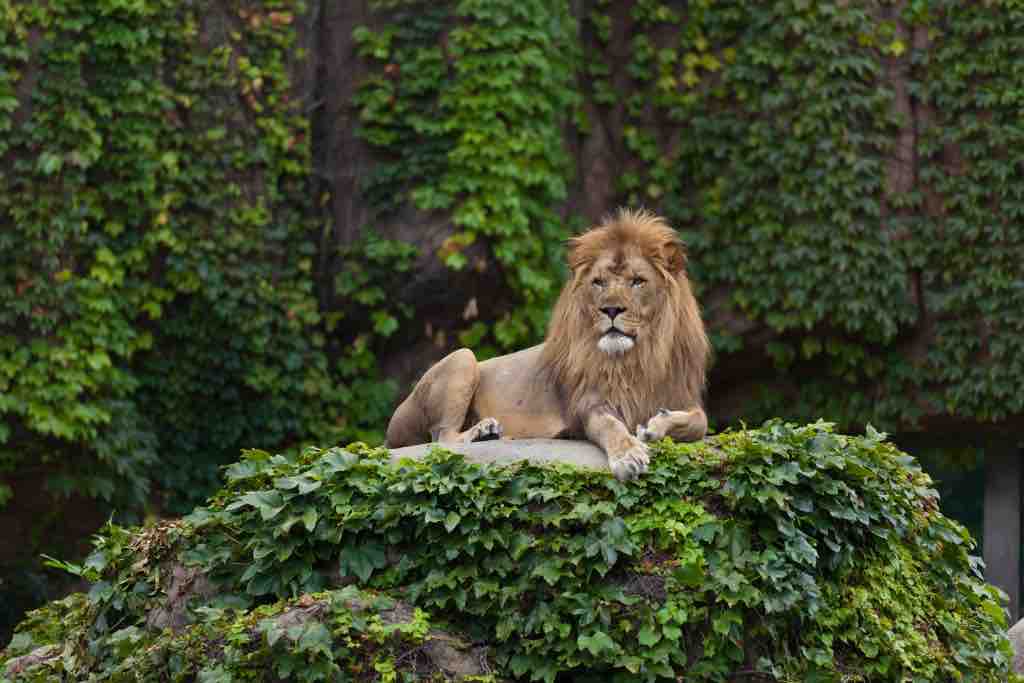 Lincoln Park Zoo is a free 35-acre (14 ha) zoo located in Lincoln Park in Chicago. This is one of the oldest zoos in the US, since it was founded in 1868. It is also one of a few free admission zoos in the United States.

Lincoln Park Zoo is home to a wide variety of animals: big cats, polar bears, penguins, gorillas, reptiles, monkeys, and other species totalling about 1,100 animals from some 200 species. Also located in Lincoln Park Zoo is a burr oak tree which dates to 1830, three years before the city was founded. 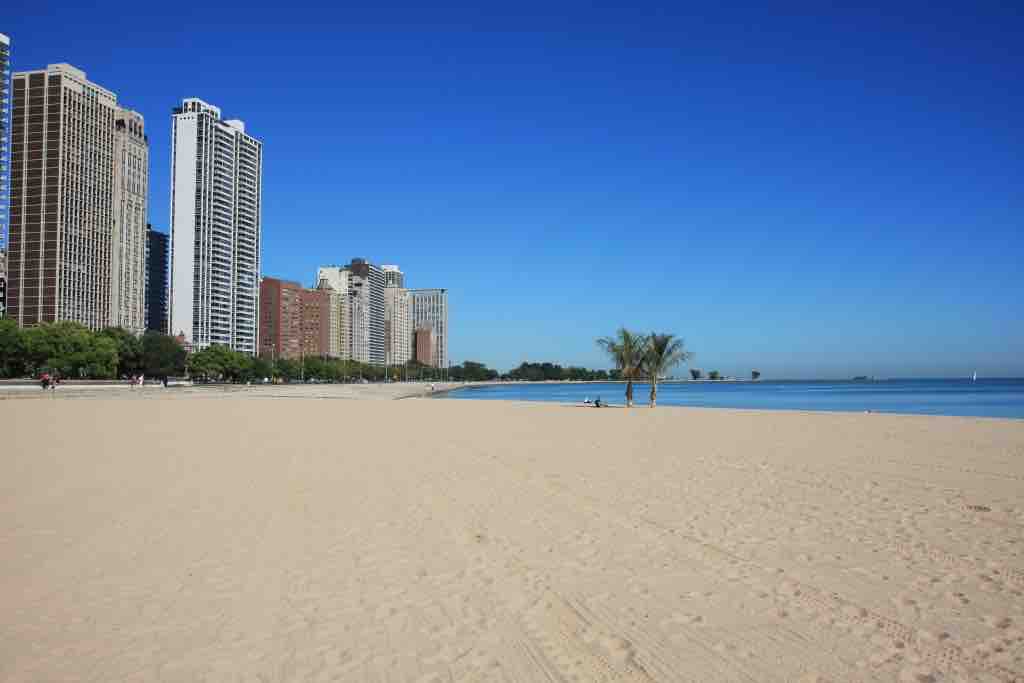 This popular Gold Coast/Streeterville neighborhood hotspot offers many amenities and a spectacular view of the city skyline. This beach hosts popular amateur and professional volleyball tournaments during the summer.

In 2011, Jeff Zimmermann created the mural entitled “You Know What You Should Do.” This art can be found along a wall running parallel to the Lakefront Trail at the access point to the Oak Street Beach underpass.

Cruise from the Navy Pier 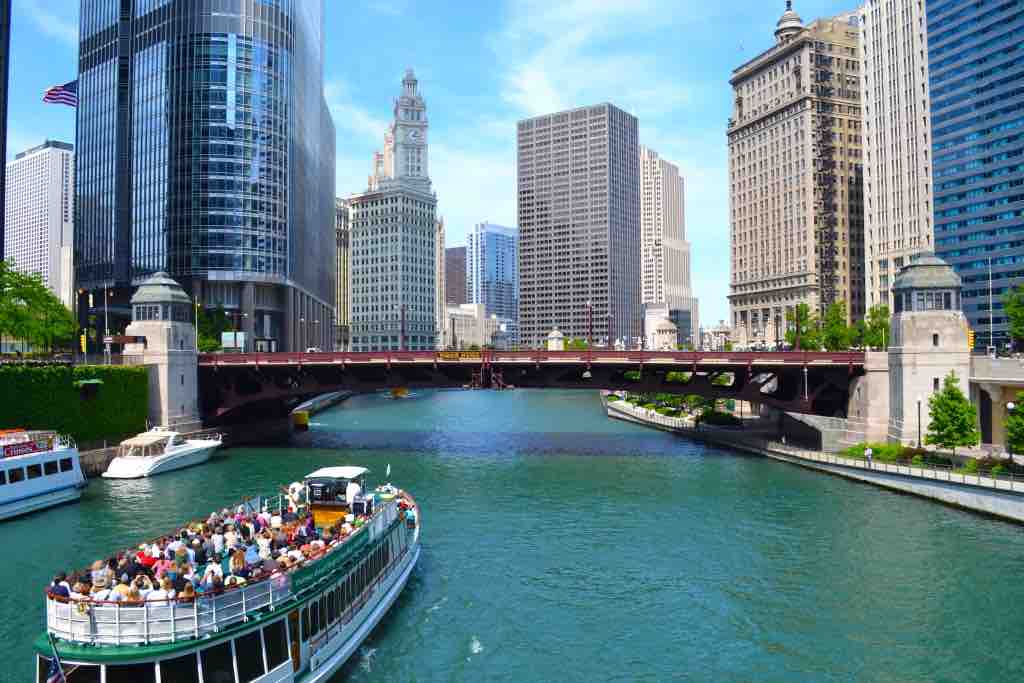 Experience one of the world’s most beautiful cities on a cruise on the historic Chicago River.  The tours board at Navy Pier.

You can also see a football, hockey and/or basketball game during your stay in Chicago. I actually went to a football game, and it was very fun! My husband went to see all three sports, but it was a very more tiring trip than mine! So if you want to take it easy, you’ll have to make some choices 😉

You can get this itinerary to download by clicking here: amazing 3-day itinerary of Chicago!

Have a nice visit! 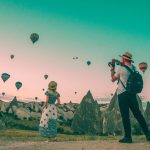 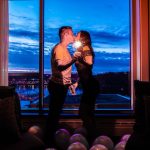